UPDATE 5/20/15 – It has been brought to my attention that I was accused of “harassing” someone.  My personal Facebook page was shown via a cell phone photo connected to that post to direct people where to find me.  The post that was on the Help Find Aubrey Moss Facebook page, read in part, “Hi, there’s content on this Facebook Page that’s harassing me and I’m not sure how to handle it…they need to be reported.”

I guess they didn’t realize that by putting that post up, they were the ones actually harassing me.  This happened over two weeks ago and I am just learning about it now.  Any clear-headed person can scour my personal Facebook page and find nothing there.  Besides, my personal Facebook page has nothing on it regarding missing people, and I do not use it to spread the word about the missing.  All that is posted on the Missing Persons of America Facebook page.  Anyway, why they felt the need to make that statement I do not know, but I believe it is just another example of another individual that has taken their advocacy to lunacy.  Please read my “When Advocacy becomes Lunacy,” to read about how this comes to pass.  You might also find this article very informative, “McStay Family Endures Years of Online Rumors.”

There has been many times, I have read comments on sites and Facebook pages, that seemed to be led by self-righteous, self-appointed leaders of a cause.  They may have begun with a selfless purpose, but notoriety and attention has led them astray.  They pick out the individual they feel is guilty, via information they have collected over the internet, and become the Judge and Jury that harass, post, bully and hound an innocent person AND their entire family.

Because they have a little bit more information than the average person, (basically because they spend all day, searching the internet for snippets of rumors) they come across as knowledgeable and trustworthy.  But, they are neither, as most times the information they have is only half, with the rest assumed.  Excerpt from “When Advocacy becomes Lunacy”

I suppose justice has been served as the person who tried to rally the troops and get everyone to “report me,” has deleted their post and nothing every came of their demand.

These individuals proclaim themselves an expert on the subject and many times proclaim they are privy to inside information, which usually turns out to be no more than made up stories or unsubstantiated tips.  Hiding behind “freedom of speech,” common decency is out the window as they post statements on their blog that is meant to create a verbal riot and draw attention.  In Hollywood, celebrities that do this are called fame *hores. They gain followers of like mind that are more interested in the drama than truth. excerpt from “Mcstay Family Endures Years of Online Rumors”

UPDATE:  4/29/15 – This comment was posted below this article:  “They found her from leads that came from our Facebook group and pages, and continue on with there lives. Would you want the world to know you as the girl that was raped beaten abused etc.? NO.”

I have asked for clarification on that statement but have not received a response, yet.  Is this what the parent’s were covering up? Or maybe not, but why would someone post something like that if it was meant to be keep personal.  But, maybe it didn’t happen because a friend of Aubrey’s mother said she was not kidnapped (see next paragraph below).

On Aubrey’s group page:   “Donna Talasco Christian (A friend of Aubrey’s mother) I’m sorry for all the confusion and lack of clarity. Aubrey was not kidnapped and the public is not in danger. We really appreciate all the hard work everyone put into finding her.”

UPDATE:  4/28/15 – Aubrey Moss’s case has gotten a lot of social media attention, and just because she has been found, it has not lessen that.

I was curious why there was so many hits on her story several days after she was found and decided to do a little looking around social media.  On her missing poster it stated, “Aubrey was last seen April 10th at her residence in Tacoma, Washington.”  But, there is indications all over that Aubrey was not living in Tacoma and had been living in Los Angeles.

If you notice the dates this was from Nov. 2014.  Evidently, she was living in Los Angeles when this was written and heading to Washington either to move home or for a visit.  Social media has been doing their own sleuthing and now are accusing the parents of using social media to search for their adult child, that they knew was in LA.  Speculation is that the parents were blowing it out of proportion and even stooped to using a flier with an Amber Alert on it that was made up by someone other that authorities.

Others say the parent’s didn’t realize the whole “missing thing” was going to blow up so, but the bottom line, did Aubrey go back to LA and didn’t tell her parents.  Why did the parents tell everyone that Aubrey was missing from Seattle when she had not lived there for awhile?  Or had she recently moved back?

Another thing that has stirred up social media is that it was posted she was found on her Facebook and other support groups, and Fund me Page, then they were all deleted.  The message was, “Please Respect Our Privacy.”  That is usually a big red flag that some one is trying to cover up something (when I looked the Facebook page was still there but with post after post about missing Brison Miller and Aubrey’s photo gone on the header and replaced with Brison’s – I actually think this is a great idea, but maybe not for a young man that has told his parents that he was leaving home–read more below).

When an teen and even an adult child go missing, many parents sometimes leave info out.  For example, the teen was on drugs before he went missing, they had a big fight, or they just plain moved out.  Instead they tell police and social media that they would never disappear like that, that there was no reason for them to be missing, etc., never divulging the whole back story.  Police are used to this and know this happens and keeps it to themselves.  This is why sometimes it seems as though the police aren’t doing anything about the case.

In these cases the parents have a pretty good idea where their adult child is, but cry wolf and say they have been abducted or forced into sex trafficking, knowing this will get them attention on social media.

When the attention comes, then this weird thing comes over the parents.  They start looking for donations and demanding help and delegating duties and everything has an sense of urgency about it.  It’s as though they begin to believe their own story.  Subsequently, people are right there, backing them up and doing what they can.  While the whole time the parent is covering up the back story.

If you look at just the goal of getting the person found, it was a success, but in a lot of these cases the person was never missing in the first place.  It was just parents that could not face that their grown child for their own reasons didn’t want anything to do with them anymore, subsequently they post on social media, claim they just disappeared and draw thousands of people who don’t have the back story, into their personal family drama.

It has just recently been found that Brison Miller, who “disappeared” from Washington, too, left on his own free will.  His parents led thousands of people into believing he would have never left on his own free will.  In Brison’s case he left a note telling them he was leaving.  Did they bother to tell social media or the police that he did?  The police, I don’t know, but social media, no, not at first.  Why?  Probably because they were worried that they would not get the attention and help to find their child if they did tell, so they covered that information up.

Some parents cannot deal with the fact that their child has turned 18 and forged our on their own and  because of the times parents can now use the fears and hearts of caring people from all over the United States through social media to perpetuate a lie that their child was abducted or worse, when they know all along they left on their own free will.  It is very easy to sucker people by the cries of a parent asking  “Help find my baby.”The fact the parent needs and wants their child back into their lives is all the justification they need to lie to thousands of people.  I think this actually should be a crime.

Many give willing of their time and money and feelings when a person goes missing and they want nothing more that to see them found, and it is not right to use people like this.

Although some are saying that Aubrey was found and to move on, for those that put their worries into her safe return, not getting some kind of explanation can be confusing and devastating, and some people can even get down right mad about it.

I have been doing this so long that I know that no explanation means a cover up.  And my friends, we may have one with the actions of Aubrey’s parents.  But what is it they are covering up?   Could it be she just took off on her own and didn’t tell her parents?

I would love to hear from Aubrey about this whole case and Aubrey if you are reading this if you feel like explaining what happened that would be great. But, of course this is a request not a demand and I know perfectly well you don’t owe me anything.

***********AUBREY HAS BEEN FOUND!!!!!************
WE WOULD LIKE TO TAKE THIS OPPORTUNITY TO THANK EACH AND EVERY ONE OF YOU FROM AROUND THE WORLD!! WE CANNOT THANK YOU ENOUGH!!
AT THIS TIME, WE ASK THAT YOU RESPECT THE FAMILY’S PRIVACY. PLEASE DON’T LET THIS END HERE! LET’S FOCUS ON BRISON. IF WE CAN FIND AUBREY, WE WILL FIND HIM. 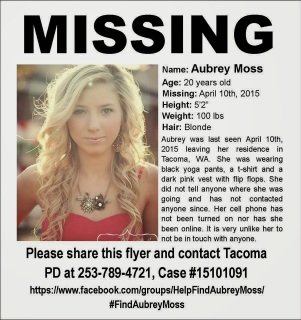 Aubrey is 5’2″, 100 lbs, blonde hair, blue eyes. She was last seen April 10th, wearing black yoga pants, a t-shirt and a dark pink vest with flip flops. She has Roman numerals on the back of her neck and arrows on her wrist. She has her nose pierced, she usually wears a hoop in it

She left her home in North Tacoma, WA, did not tell anyone where she was going, left with nothing, has not contacted anyone, her cell phone has not been turned on nor has she been online. Aubrey does not own a car.