Tonya Jackson: Went missing after meeting up with co-worker Found 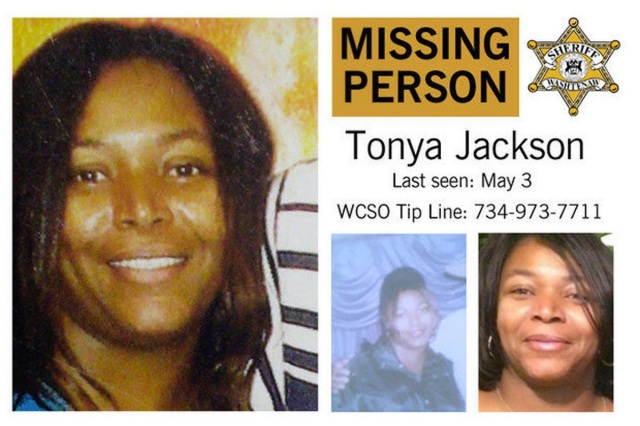 http://c.brightcove.com/services/viewer/federated_f9?isVid=1&isUI=1
UPDATE:  5/28/15 – Two vehicles were found in Ford Lake in Ypsilanti Township on Thursday morning and one of them was a silver SUV.  Also, the Washtenaw County Sheriff’s Office said a body was also found.

Earlier in the week a wallet washed that washed ashore had Tonya’s ID in it.  It was found by a citizen near Bridge Road by the dam.  This prompted the Washtenaw County Sheriff’s Office to send a dive team to search the lake.

“This morning, while searching Ford Lake in Ypsilanti Township the Washtenaw County Sheriff’s Office Underwater Search and Rescue team discovered a body,” said Washtenaw County Sheriff’s Office spokesman Derrick Jackson, who is no relation. “Although the medical examiner’s office will confirm the identity of the individual, we do believe that it is the body of Tonya Jackson.”

Original story: Tonya Jackson, 43, of Ypsilanti, Mich. has been missing since May 2014.  She was last seen at a Romulus motel with a co-worker.

They checked out at around 6:30 p.m. and the co-worker went one way and Tonya went to the other.  The co-worker was given a lie detector test and he passed.

There has been no activity on her phone or bank account.  Tonya’s silver 2007 Saab 9-7X SUV with plates CCL7888 is also missing.

A note was found with her name on it in at the Steak ‘n Shake in Englewood, Ohio restaurant shortly after she disappeared.

The note had her name, the name of the guy and a description of the vehicle and it stated she needed help.

If you have any information please call the Washtenaw County Sheriff’s Office at 734-973-7711.