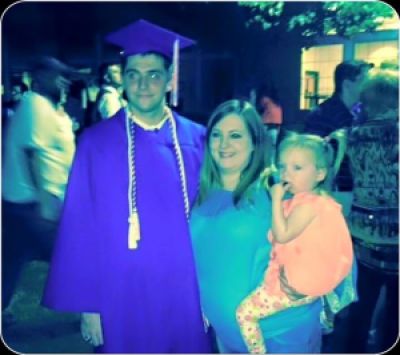 UPDATE 09/22/15 – Billy Ray “Tank” Minkley, Jr, has confessed to the murder of Leah Martin.  He was arrested on Aug. 19 on warrants for tampering with evidence, unlawful possession of a firearm and possessing a prohibited weapon.

The Graham police will seek capital murder charges against Minkley not only for Leah’s death but also the death of Ronney Jackson, Elizabeth Bernard Sessums and a friend that was visiting them, David Adams in June 2014.  Evidently, Minkley used to live with Jackson and Sessums.

An informant gave the police information that Minkley used to live with the couple and left town right after they were killed.    The police tracked down the girlfriend that was with Minkley when he went to the home and she stated she heard what sounded like a backfire but when Minkley got back into the car he told her that Ronney and Jackson had pulled a gun on him so he shot Jackson, some guy he didn’t know and then Sessums because she was trying to call the police.  This was also reiterated in the court affidavit.  Minkley told her to go into the house and she saw the three lying on the floor.  She helped Minkley take cellphones and a laptop.

The affidavit also stated Minkley told his dad that a guy pulled a gun on him and he wrestled it away and shot him then killed the other two in self-defense after they began to “grab him.”

The affidavit also stated that Minkley rented a backhoe after Martin went missing.  Ross Earl Hellams an employee where Martin worked heard Minkley operating the backhoe.  He had also took a shotgun from Minkley when he saw that he was going to throw it into a trash can.  He later gave the police the shotgun.

Hellam will also be charged with capital muddier in the Martin case and a third man, Elton Carroll Blair, 43 will be charged, too.  Blair is the paternal grandfather of Leah’s 2-year-old daughter, and the owner of the auto shop where she worked.

No motive for Leah’s killing has been stated at this time. 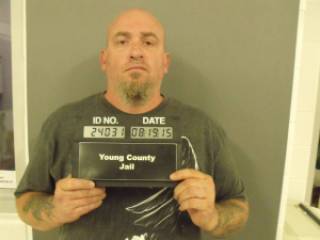 UPDATE 8/13/15 – The remains have been identified to be Leah Martin. No cause of death has been released, no arrests have been made and the investigation into her death is ongoing.

UPDATE 8/6/15 – Graham Police Chief Tony Widner confirmed that human remains were discovered about 10 miles west of Graham on FM 209. A home is also being the investigating near where the remains were found.  The home was vacant. 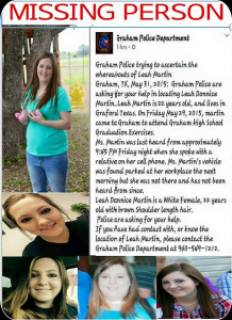 UPDATE:  7/5/15 –  Lois Shaffer, Leah’s grandmother is stating that she has been receiving anonymous threatening phone calls.  What those threats are have not been elaborated on.

Shaffer also stated they are frustrated with CUE Center for Missing Persons and have been not much help.    Shaffer said she call the Texas Rangers on June 8 to talk to them about the case and they said the Rangers knew nothing about the case, but then Tony Widner, Chief of the Graham Police Dept. said that the Texas Rangers have been helping on the case since the beginning according to the Graham Leader news.

Leah Donnice Martin, 22, from Graford, Texas has been missing since May 31, 2015.  On Friday, May 29, Leah drove to Graham to attend the Graham High School graduation exercises.  She called her family at 9:45 p.m. that evening.  The following day her car was found in the parking lot of  EC’S Auto Repair located at 1420 380 Hwy Bypass  in Graham where she worked. 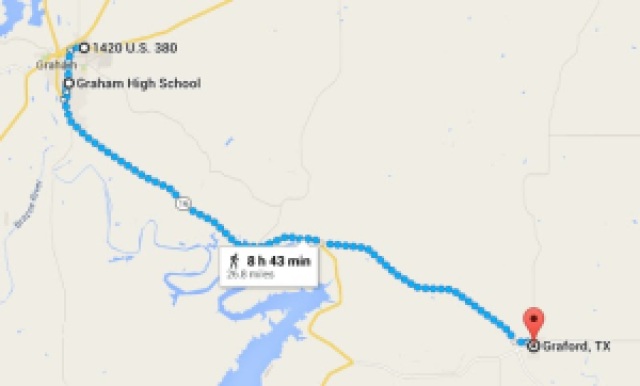 Posted by admins on her Facebook page, “Please try to remember your whereabouts on Friday night around 9:23 pm . If you was traveling down 380 bypass around that time any vehicle that you might have passed could be a lead. She drove her truck to EC’S Auto Repair located at 1420 380 Bypass after reaching that location she has not been heard from since. Any information would be greatly appreciated. Please do not post any information on this page as to any leads you may have. All information should be reported to Graham Police Department @ (940)549-1212 ask to speak to Jeff Smith.”