Teen disappears after knowing about robbery at abandoned “mansion” FOUND

UPDATE:  9/2/15 –  PIO Sgt. Steve Hernandez said Searcy has been found alive and safe and that the case has been closed.

A 19-year-old Arkansas teen was reported missing on Aug. 27, but may have been missing before that.

The family of Tiffany Danielle Treece  called her cell phone on Aug. 4 and the maintenance man at the Ridge Apartments at 2001 Quality Dr. where Tiffany lived answered the phone.  He told the family he found the phone by the apartment’s car wash, according to TV11 news.

The police talked with Treece’s roommate and he said he had not heard from her.  Treece’s roommate suffers from a  disability, but it was not elaborated on what that was in the media.  He told police that Treece knew two of the robbers that did a robbery at the “mansion” in Searcy, and he thought they hurt her.  (Evidently, the mansion is a nick name for a house located outside of Searcy that is a drug house.) 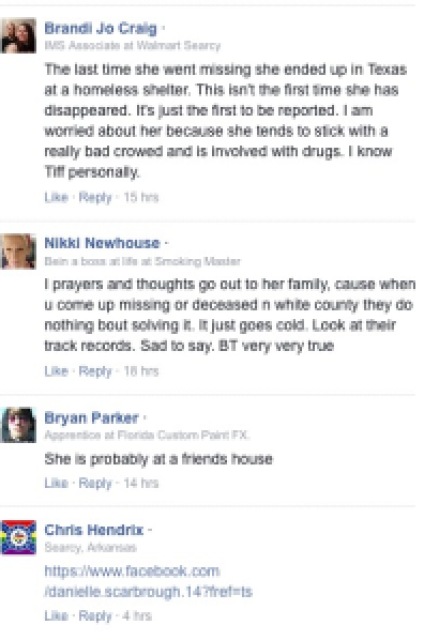 The link for Danielle Scarbrough looks a lot like Tiffany with shorter length hair and has a post on there from yesterday.

Interestingly, two men, Kristopher Kalson, 27 and Turon Jacobs, 21, were arrested at the Ridge Apartments on Aug. 4, because they were breaking into cars is the same day that the maintenance guy said he found Tiffany’s phone.  Police found a stolen .9mm semi-auto pistol in Kalson’s possession  and a .45 caliber semi-auto pistol in the parking lot that was also stolen.  It is not known if there is any connection to Tiffany’s disappearance.

If you know anything out this case please call the Searcy Police Dept. at 501-268-3531 or leave an anonymous tip here.