Since Skylar’s disappearance, Ukulele Ray has passed away on April 6, 2018. Olivia, Skylar’s mother has been working on starting the Sky Alert Foundation, based on an idea by Ukulele Ray.

“I want to create a drone app that will allow licensed drone operators to search for people who are missing. Ray came up with the idea of calling it Sky Alert,” Olivia Tosic told the Coast News.

UPDATE -The human skull found near Lake Hodges in early October has been identified as the skull of Marisol Lopez, a 29-year-old woman whose partial remains were found in the same area last October.

UPDATE:  10/18/15 –
Skeletal remains were found on a walking path at Lake Hodges on 19900 block of Lake Drive on Saturday around 7:30 a.m.,  When Olivia Tosic heard the news she tried to contact the police to see if it was her son.A woman who was walking her dog found the remains that at this writing are not complete, but are being called partial.  There is no word whether it is male or female.  Partial human remains were discovered on a walking path along Lake Hodges in Escondido Saturday.

A Palomar College student went missing on Sunday, August 30, 2015 after taking Uber to the Wild Animal Park, but getting out before he actually got there.

Skylar and Olivia TosicSkylar “Sky” Peterson Tosic, 20, from Escondido (San Diego County) got out of the Uber and went to the San Pasqual Academy, a home and school for foster teens located about five miles from the park.  He was exhausted and severely dehydrated when he got there. Skylar was driven home from there by one of the staff.  He spoke with his grandmother, got something to eat and then without her knowing he left the home.  She text him and he said he was with some girls, Thaddeus and Eli and they had passports for him.  He hasn’t been seen since.

His mother stated that before that, Sky had been changing and lost a great deal of weight and went from an attentive young man to “detached person espousing questionable religious ideology,” reports the Escondido Grapevine.  She was wondering if the Rainbow Family or another group was trying to indoctrinate Sky.

“We are deeply concerned about his health and safety,” Ukelele Ray told the Escondido Grapevine.  Ray is the boyfriend of Skylar’s mother, Olivia Tosic.  Ray stated that Sky is his certified caretaker.

Skylar has a blog that he has not posted in since 2013.

Kimberly Tyler Brentner posted, “He was taking a religious studies class at Palomar and made some new “friends” outside the class. We suspect he’s been brainwashed by and is with the Rainbow Family.”

The 2015 Rainbow Gathering was held at the Black Hills National Forest in South Dakota and was declared over on July 8.

Attention: Palomar College Students –Young Adults in San Diego County. Have you been approached by Thaddeus and Eli with religious Ideology? Promising you a new life praising the spirit, organic living without technology and a passport to go with it? 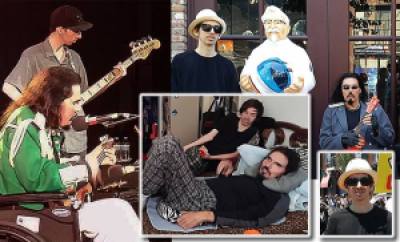 Parents has your child suddenly changed, GOING from an attentive young person to “detached espousing questionable religious ideology,”
If so we need to hear from you!

Timeline of the Disappearance of Skylar Peterson Tosic
A few weeks prior to his disappearance.

“THE DAY BEFORE SKYLAR WENT MISSING”

(8-29-15) HE HAD LEFT HOME WITHOUT HIS CAR AND TOLD HIS FAMILY HE WAS HANGING OUT WITH HIS NEW FRIENDS HE MET AT PALOMAR COLLEGE (THADDEUS AND ELI) HE HAD SAID HE WAS SPENDING THE NIGHT WITH THEM AND THEY WERE TOO FUNNY. THAT NIGHT SKYLAR SOMEHOW ENDED UP ON A COUCH AT THE SAN PASQUAL ACADEMY (A FOSTER HOME). THE DIRECTORS SAID SHE SAW HIM SLEEPING WHILE LOCKING UP AND LET HIM REMAIN SLEEPING THERE. WE HAVE HUGE CONCERNS AS TO WHY A 20 YEAR OLD MAN (A STRANGER) IS ALLOWED TO SLEEP AT A FACILITY THAT HOUSED MINOR FOSTER KIDS? WE HAVE NEVER GOT A STRAIGHT ANSWER FROM THE FACILITY AS TO WHY THEY ALLOWED THAT THE ACTUAL DAY SKYLAR WENT MISSING 8-30-15
ON THE MORNING OF 8-30-15 SKYLAR HAD WOKE UP AT 7:30 A.M. AT THE SAN PASQUAL ACADEMY. AROUND 1:00 P.M ONE OF THE EMPLOYEES DROVE SKYLAR HOME. HE CAME IN ATE, TALKED TO HIS GRANDMOTHER ABOUT HIS NIGHT UP ON A MOUNTAIN WHERE HE COULD ALMOST TOUCH GOD. HE WENT AT TOOK A SHOWER. AROUND 3PM WHEN HIS MOM WENT TO TALK TO HIM HE WAS GONE. SHE SENT HIM A TEXT, TO ASK HIM WHERE HE WENT. SHE FINALLY GOT A REPLY THAT HE WAS WITH SOME GIRLS, THADDEUS AND ELI AND THEY HAD PASSPORTS FOR HIM.

(“There’s two women with us now. They have passports and they’re rich. They want me to travel with them. They want to go to … ”)

THAT IS THE LAST SKYLAR HAS BEEN HEARD FROM. HIS CELL PHONE HAS NO CALLS ON IT – HIS BANK ACCOUNT HAS NOT BEEN TOUCHED

What happened to Skylar and do you know THADDEUS and ELI?”

If you have any information please call the Escondido Police at (760) 839-4722 or leave an anonymous tip here.