The coroner determined she died from sharp force injury to the chest.

There is a $1 million warrant for Tomas Sarinina.

Original story:  A California woman went missing from her home on Sept. 4 and has not been seen since.

Sally Mityas, left her three children behind and went missing from her home in the 1600 block of Briar Avenue in Ontario after an argument with her boyfriend’s brother, Tomas over money.

Eddie Sarinina, Sally’s boyfriend  reported her missing when she did not return.  Tomas told police that Sally packed her clothes and left in a car around 11 a.m. that morning, what is discerning is that the family does not know who she left with or anyone who drives a maroon sedan. 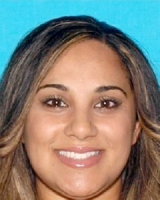 Sally works as a hygienist at Premier Dental in Norco and she has not shown up for work, nor has she called her family or friends.

“She’s been the hygienist here for over a year and she’s a very dependable, loyal, reliable hygienist, and an amazing mom, very dedicated co-worker and a very dear friend.  She would never leave her kids behind,” said Janel Severns, Sally’s friend to ABC 7 news.

Sally is Egyptian, 5’6″ tall with black hair and brown eyes.  If you have any information about her whereabouts, please call the Ontario Police at 909-986-6711 or leave an anonymous tip here.