Waco woman goes missing and may be on Greyhound bus FOUND 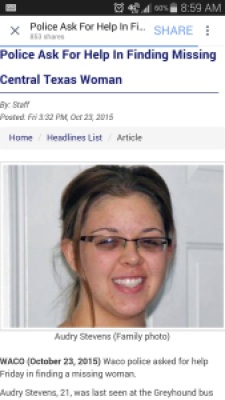 “She is OK and (her) family has been notified,” Waco police Sgt. W. Patrick Swanton said Monday.

Audrey Stevens as last seen headed to Houston via greyhound. She told her grandmother she was leaving the country. She has numerous medical issues and believed to be suffering from a mental health issue/breakdown

Stevens is 5’8 and 130 pounds with brown hair and eyes. She was last seen wearing canofluage boots, loose black pants, an orange tank top and a crème colored fishnet sweater.

Anyone with information is asked to contact the Waco Police Department at 254-750-7500.