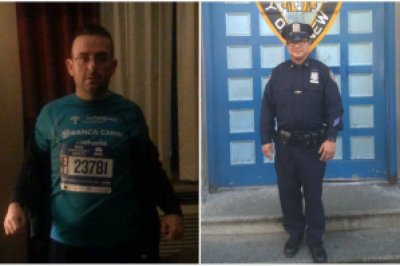 A New York City Marathon runner was found on the subway, still wearing his running clothes and bob number, after he had been missing for two days.

Gianclaudio Marengo, 30, from Italy who does not speak English, got lost after he crossed the finish line.  He couldn’t find his way back to the hotel, because he lost his directions to the hotel, his hotel card and the map to the subway, that was in his backpack.

Marengo’s friends, who traveled with him to the marathon from Italy had already crossed the finish line way before him.  By early evening, the group searched the park but did not find him.   Meanwhile Marengo, still wearing his turquoise shirt, black shorts and racing bit with the number 23781, was searching for them.  When he couldn’t find them, he bought a piece of pizza and sat on a bench and waiting.  When the group met for dinner that night and Marengo did not show up, they knew he was lost, and called the Italian Consulate, who called the police.

Marengo spent the night in the park and on Monday went to Kennedy International Airport in hopes to meet up with his friends as they were scheduled to fly out that day.

Mr. Boschini, one of Marengo’s friends said the airport security thought he looked homeless, and kicked him out of the airport, but another account stated he was turned away because he didn’t have proper documents.  Not knowing where to go next, Marengo got on the subway and sat.

Tuesday morning Officer Man Yam, 43, got on the train heading to Lower Manhattan and was looking at his phone had reading a news story about a missing Italian runner.  When the subway went under a bridge and he lost reception he looked up and saw Marengo sitting across from him, still wearing his marathon clothes.  Yam took Marengo off the bus and bought him a doughnut and coffee and showed him the article he was reading, with the photo of himself.  Marengo began to smile as he realized that he had been found.

Marengo was taken to the hospital where he was suffering from dehydration.