A brisk evening of May 10, 1974 as the recruits break from a Police Academy gathering. A young Police Cadet was traveling towards Long Beach to see a girl that he had met up with after his divorce. On his way he sees a female being carried by two African-American men, as though she was passed out.  He stopped to offer a hand though the scene must have been much more sinister. Before he realized they were not good Samaritans, two others appeared and he was shot. They then loaded up Officer Edwards body in his car and drove to an abandon building, along with the damsel he was attempting to help. Very few witnesses came forward and many statements were believed to be false. 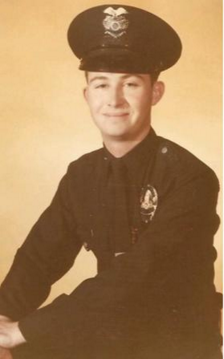 It was later discovered that the female was reported missing by her friends at a local hang out not far from were Mike Edwards had stopped to help.

Edwards was last seen around 10:30p.m., May 10, 1974. His Charred body was discovered by two teens children playing 1034 West 186th Street in Los Angeles . His gold Pinto was found 10 miles away.  A witness reported that two African males were seen parking and exiting the vehicle.

Police have not been able to piece together what happen and who was the group of men and teens walking down the middle of the street with a body.

The medical examiners report shows that apparently two of the individuals in the group shot Mike Edwards from both sides of his body.