Brian Jenkins is missing from Hoosick Falls, New York.  Brian was last seen near the woods of Albany. At the time he had a Virgin mobile cell phone but the phone is off, and may have run out of battery.  He last texted his daughter before he went missing and the family has checked his phone and there were no messages out of the ordinary.   The family stated that Brian did receive food stamps shortly before he went missing in April, but he has not refilled his heart medicine prescription, and has not been seen since.  Brian may be transient, could be in a shelter or could be in a different area.

If you have any information or think you know where he may be, please take a photo and leave a message with us.  Brian is 5″8, blue eyes, brown/salt and pepper hair, 4 tattoos with two on each arm, a panther, wolf, eagle, and Harley.

Posted in 2016:  “I’ve had some people ask me for updates and what were doing next. We’re at a complete stand still and don’t know the next move. 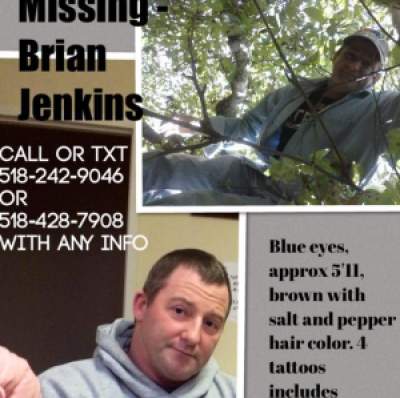 We’ve spoke to the detective and there is nothing further they can do we talked to him a superior amd even the DA. We’ve contacted the cell phone company and card company. Also we have contacted his insurance to see if he’s refilled prescriptions as well as two different news stations. We’ve contacted friends and family all over the place. We’ve done one search and have tried our best to do others but without help from police or even volunteers it’s very difficult. I’ve even contacted the mayor of Albany and she’s was very nice but nothing she could do and that Albany police has done all they legally could. I’m very open to suggestions. ..maybe we missed something we could have done or can do. Thank you for continued thoughts thoughts and prayers

In January 2017, after the Detective working on Brian’s case was arrested for DWI, Brian’s Facebook page posted:  “Here’s the idiot that was supposed to look into my dads case, who gave us numerous empty promises, and didn’t take his case seriously at all. When my mother and I went to his office to speak to him in person he actually yelled at us and said we were wasting his time! After being completely pissed off when seeing this I stopped….. and am praying its a blessing…. maybe we can now get someone new who will help and maybe review this and work on dads disappearance.”