UPDATE 1/4/15 – Herrin police say Stacey was located in Chicago. She called her mother to tell her she was safe and a Chicago LEO located the teen and confirmed her identity.  She would not answer when asked why she texted “help.”

Original story:  A missing Illinois woman sent out a text that read,”Help.” on Dec. 28, 2015 and has not been seen since. The Herrin Police Department stated that Delia Ann Stacey, 18,  left her home in Herrin to meet a friend around 11 a.m.  Her family received a text from her phone later that day that only said “Help.”  They called the police and reported her missing around 5:30 p.m.

Delia’s sister-in-law posted on Facebook: “‘ok ppl I need your help my name is Christen Stacey I’m on my sister in laws face book she is missing has anyone seen her today at all last seen at her father’s this morning then took off an we haven’t heard from her since her phone goes straight to voice mail.”

Some posters on Facebook are stating that Delia took off with a guy her dad didn’t like, but others are stating she has done that before but always texted regardless so her dad knew she was okay.  Attempts to track her by her phone by the police have been unsuccessful at this time.

Delia posted on her page that she was “in a relationship” on Dec. 25th and that she had a new job and would be leaving on Saturday. 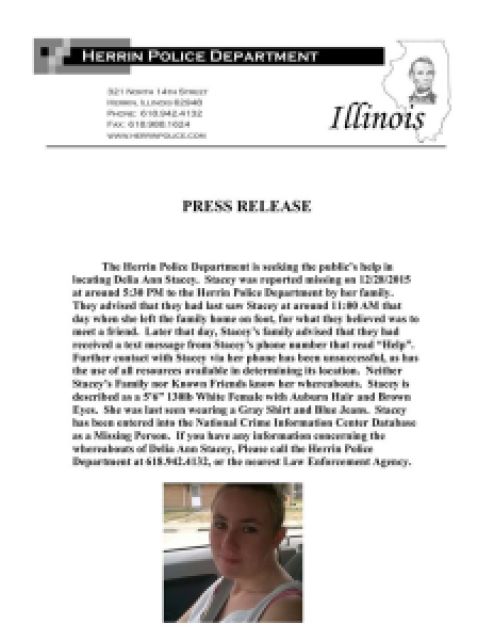