UPDATE 8/25/17 -Law enforcement and the Chillicothe Gazette received an anonymous tip via Facebook saying Lemons body was put into Ross Lake.  Divers are now at the location searching.  “Gone – The Forgotten Women of Ohio” is a new docuseries that is being aired now on Spike TV and features Wanda Lemons as one of the forgotten women. 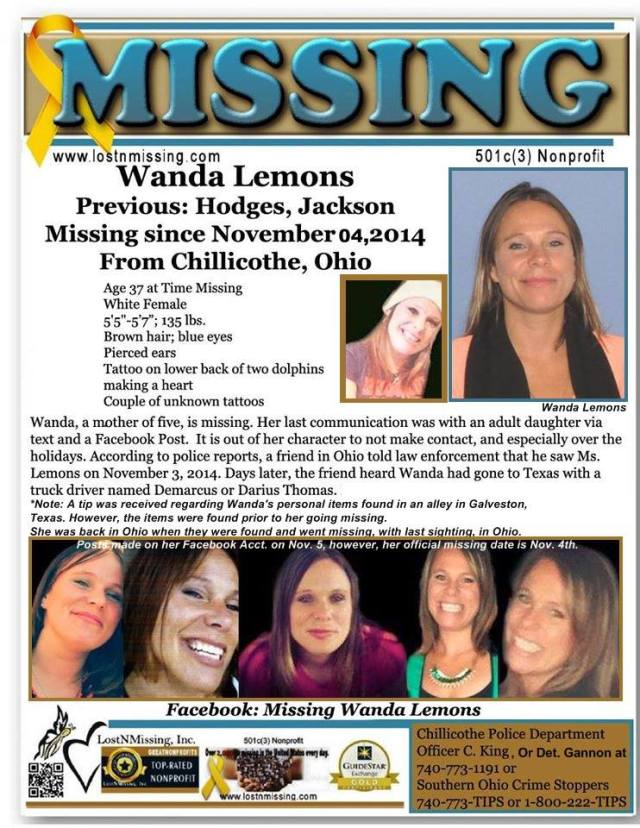 Wanda Lemons is missing from Chillicothe, Ohio since 2014.  She was seen by her mother on Oct. 2  and a friend saw her on Nov. 3.  The friend told the police that Wanda said she may be going to Texas and riding with a truck driver.  Lemons was reported missing on Dec. 28.  Chillicothe police believe that Lemons was in the Galveston area.  She may also be going by the name of Hodges or Jackson.

Charlotte Trego is also missing from the same town since May 2014. There are also four other women found deceased in Chillicothe, that police are wondering may be connected to the disappearance of Wanda and Charlotte. Click here to read the story.

Read:  Did Neil Falls have anything to do with the missing Chillicothe women?