Breaking News
Home » Found » Do you know who this Ohio predator is? FOUND

Do you know who this Ohio predator is? FOUND

December 2016 – Dustin Andrew Christian, 29, of Lorrain was identified as the person that in the surveillance photos.  He was arrested on charges of kidnapping and rape.

“Detectives and agents have worked this case tirelessly for the last seven months and we are pleased to announce an arrest in this case,” said Cleveland Division of Police Calvin D. Williams in a press release. “With this suspect behind bars, our children are safer.  This case could not have been solved without the partnered effort of all of these agencies.”

Using DNA the police were able to find a connection between the May attach and another one in February, where the little girl got away and ran to her father.

“If unknown DNA from a crime scene or from a victim does not match to any DNA in BCI’s database, BCI now has the capability to search for familial DNA,” DeWine said. “This DNA identifies someone with a genetic near match to the person who actually committed the crime. It could be a brother, father or a son. We have at BCI now specialized software that looks for genetic near matches in the state DNA database. A familial search will identify the top 100 DNA profiles that could potentially be siblings and the top 100 male DNA profiles that could be potentially fathers or sons. From there, once those 200 have been identified, our scientists pulled DNA samples on those top 200 potential matches. Those DNA samples are located at BCI. We have about 600,000 of them. Then, our BCI scientists conduct another test on each of these 200 samples. It is something called a YSTR test. The test singles out the Y chromosome in males, which fathers pass on to their sons.”

9/12/16 – The FBI is asking for help to identify and locate a child predator.

The FBI is focusing on Buffalo, Detroit, Columbus, and Cincinnati. They know that the man does travel to Cleveland, but don’t believe he lives or stays there.

A surveillance video shows him walking in an alleyway near the home of the 6-year-old.  The FBI says he has a distinctive walk.

The media has not stated a lot of explanation but the little girl was dropped off a few miles from her home 17 hours later, according to the police in a press conference.  The little girl stated she was taken to a  room filled with very distinctive wall paper.  The man lives with a black man and a brown woman the little girl said.  The FBI believes the couple did not know the little girl was there.  In the home was two dogs, one white and one brown.

Investigators say the suspect travels to the Cleveland area, but they don’t know if he stays here. He is a white male, around 30 with brown eyes and facial hair, a hat or visor and a hood. His sweatshirt has a possible logo on it, and his shoes are dark with light-colored soles. The car police are looking for is a 2003-2005 four-door Pontiac Grand Am with a sunroof, spoiler and black mirrors.  In the video above the FBI is also looking for a 2002-2003 Malibu with mismatched front driver’s side quarter panel. and back spoiler. 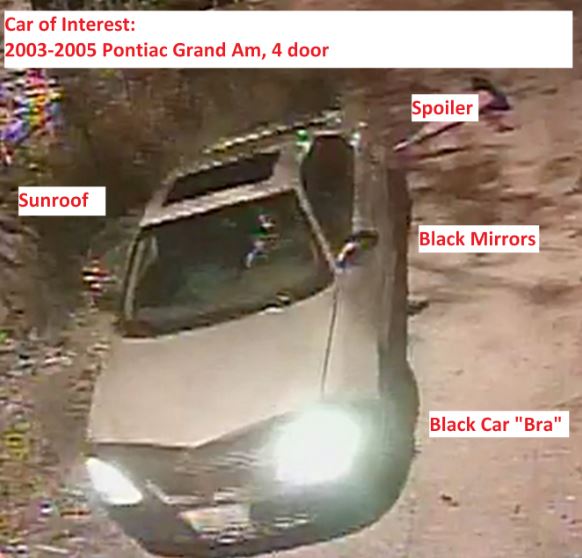 A reward of up to $20,000 dollars is available for information that leads to an arrest in the case.

In the video above of the predator the following scenarios:

On May 15, 2016, at approximately 5:00 a.m., a white male is seen at the window of the home in the Cleveland incident, then runs back to his car and leaves the area.

On May 21, 2016, at approximately 3:12 a.m., the suspect’s vehicle is seen near the corner of West 101st Street and West Boulevard. The suspect looks at his phone while waiting for a red light.