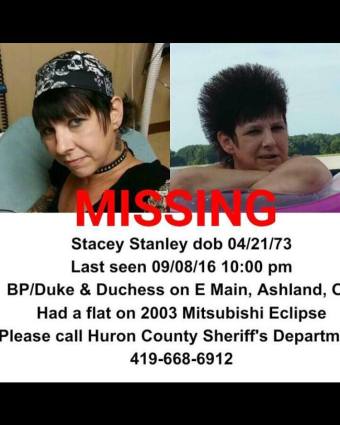 UPDATE 9/14/16 – The police have confirmed that the body found on Covert Court was Stacey Stanley.

UPDATE 9/13/16 – A man’s name has been released who is connected to this case.  Shawn Michael Grate, 40, is being held in the Ashland County Jail on a kidnapping charge, according to Chief Deputy Carl Richert of the Ashland County Sheriff’s Office.

On June 20, 2016, a deputy stopped Shawn Grate who was wanted on a felony child support warrant.  Shawn ran and the deputy gave chase, but lost him in a thick wooded area across the street from O’Reilley Auto Parts on U.S. 42.

This is the same day that authorities stated the house on Park Avenue East burned down on June 20 at 4 a.m. where a body of a woman was found  behind the house in the woods.

Police went to the home and found the remains of two people inside.  A suspect was taken into custody.

After the suspects arrests, apparently the suspect lead the police to a location where he allegedly murdered a woman in a house at 1027 Park Avenue East in Madison Township in Richland County in June, reports Fox 8 I Team.  That home was destroyed by fire in June and evidently the body has been in the woods behind the house since then.

Stacey Stanley, 43, has been missing from Ashland, since about 10 p.m. Thursday, Sept. 8.  She was last seen at the BP/Duke & Duchess on East Main Street with a male helping change her flat tire on her 2003 Mitsubishi Eclipse.  Ashley Dewiel said,”her brother got a call from her stating that she had had a flat but she was on her way home. That call which made at 10:47pm, was the last they have heard from her.”  Stacey’s I.D. and her phone was found in the floorboard of her car.

Police have not stated any of the body’s are her, nor have they identified the body’s at this time.

The News Journal reports that Veronica Stanley, Stacey’s cousin and other family members have been looking for her in the area of the Covert Court house and a vacant house next door, by knocking on doors.  They believe that there presence may have  caught the man off-guard and given the woman a chance to escape.

Elizabeth Griffith is another missing woman missing from the city of Ashland. She was last seen in the area of Aldis and Walmart on August 16th.