UPDATE 7/25/17 –  Tazewell County deputies were called to a house on 14316 Illinois Route 29 south of Pekin after the owner found remains behind the house, reports PJ Star.  The owner was mowing grass when he came upon them.

On Sunday, a search group, Trucks 4 Kidz found a red sweatshirt in the woods under the Shade-Lohmann Bridge along the Illinois River’s west bank in Bartonville that may belong to Robert, reported WEEK news.  The search group told police they received an anonymous tip to search there, said Bartonville Police Chief Brian Fennel.  The Pekin police doubted it belong to him as it was not the last thing he was known to be wearing.  On Monday the police told Journal Star it did not belong to him.

Authorities have not determined who the skeletal remains belong to at this time and said they have requested Robert’s dental records.

UPDATE 1/20/17 – Robert is still missing.  My hopes that reminding people he is still out there will remind them to  keep their eye out for him.   In an update the Pekin Daily Times on Jan. 4, they reported that Robert’s mother Lisa Bee, did not appear in court to answer to the truancy citation issued the day her son ran from the school officer.  Social media rumors state that she is no longer living at the same address she was living when Robert went missing.

Speaking of social media, Jennifer Gordon, of Manito, 36, faces a misdemeanor charge of obstructing justice as she reported through her Facebook page on Dec. 27, that she knew  Robert was at a particular house that the police were familiar with.  After the police searched she admitted to lying because she wanted the police to look for him.

UPDATE 12/16/16 – Robert Bee is still missing.  Social media have been hard on Robert’s mother, Lisa Bee.  Even Robert’s sister, Stephanie Bee Clauser has been critical of her.  She asked Lisa when she posted on Facebook why she was not at the last vigil for Robert?  She also stated that Lisa had moved and left no forwarding address.

Friends of Lisa have come to her defense and said that she had no choice but to move as she was receiving so much criticism and threats she went into hiding.

“December 17th @ 5pm, Tazwell County Courthouse, there will b a candle lighting for Robert Bee!!!! Please come out and show your support for him to let him and everyone else know that the community is still searching for him and so that he knows he has people who love him and care for him!!!!”

The Pekin Police Dept. posted on their Facebook page: “There have many ideas expressed in this post about things we should do. Many of those things have been done. Due to the Investigation, we can not release everything we have done in this case. Please know there has been a tremendous amount of investigation, searches, and interviews done in this case, and we will continue.”

An anonymous poster posted on MPofA’s Facebookpage:  “I live in Pekin, Il. Our entire city has searched for him for the last 11 days. We are heartbroken that he has not yet been found. The truancy officer came to his home Thurs..and Robert fled on foot from him. He returned later asking his mom to spend the night w/ a friend. That friend walked him to the bus stop the next day ( Fri.) but he did not get on the bus. Robert then went back home. His Mom says he was there while she was at a job interview (she knows this because he got the mail, ate a peanut butter sand., and rumbled thru some clothes on the bed)..then he left again..on foot..with no extra clothes..no food..no bike..nothing. His Mom filed a missing person report Friday evening. His Mother ( Lisa Bee) has not technically seen him since he went to a friend’s house that Thurs. night. Friends, neighbors have all been interviewed by police w/ no results. No one has seen him. The entire story has MANY strange twists..and quite a few inconsistencies from the Mom ( his home environment) which leaves this community angry..frustrated and confused. …truthfully ( my opinion)…. his Mom should be arrested for neglect. It is that bad. :/Such a sad..sad situation and we continue to pray he is found soon.” 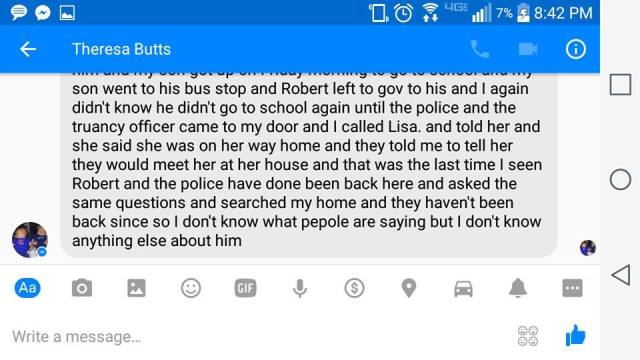 Original story:  Robert Bee is missing from Pekin, Illinois.  He was last seen on Nov. 11, around 11 a.m., and the police today are now calling the case an endangered missing person.

Robert’s mother posted, “He left his bike home so he is walking and no he has not returned home yet please if anyone knows anything let me know please.”

Rober is 4’6″ tall and 110 pounds with has red hair and blue eyes. He has a rash on his left cheek from poison ivy, and was last seen wearing a red and gray shirt, blue jeans and red Nike shoes, police said.

This advisory was released today 17 days after he went missing.  Before that he was classified as a runaway. 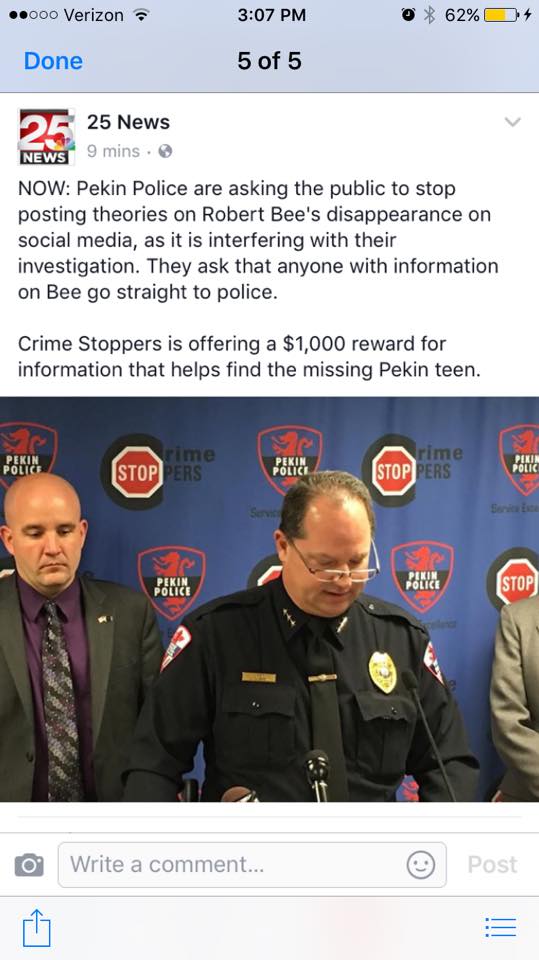 Below is an example of the posts that the police are talking about.  Robert’s mother posted a photo of a woman’s hair that said, “Hair Goals,” that upset many people on her page. 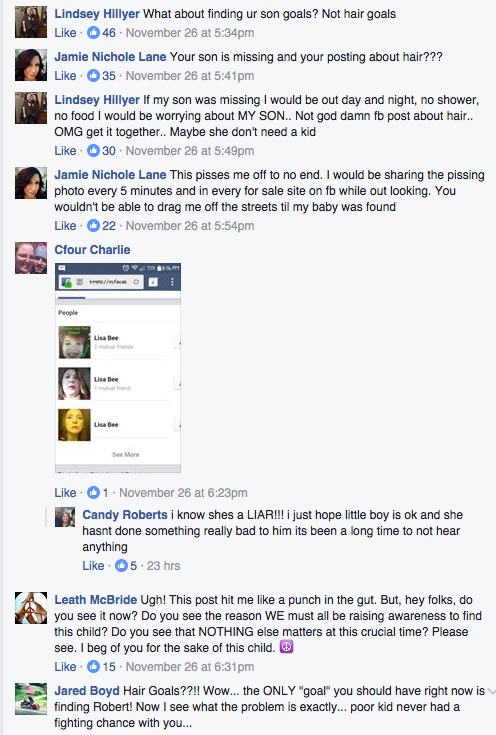 Anyone with information about this endangered missing person should call the Pekin Police Department at 309-346-3132.