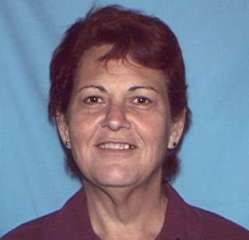 An underwater recovery team of the Missouri State Highway Patrol located a “strong image which appeared to be a vehicle on its side in a deep pocket of water.” By 2:30 p.m., divers had recovered Deborah and her Jeep.

UPDATE:   Crystal Jones, Deborah’s daughter, tells KOLR/KSFX during a search Sunday morning some of Deborah’s clothes were found in a nearby river
Deborah Cirrincione, 54, is missing from Dixon, Missouri.  She was last heard seen leaving her home in St. Roberts, Missouri. on April 28th.  She was going to the Wal-Mart in Fort Leonard Wood.  Deborah had to take an alternate route as heavy rains had closed the usual way home.
Deborah was driving a 2005 bue Jeep Wrangler with Missouri License SF1-N6Y.
Deborah is 5’5″, 175 pounds with hot, red hair and brown eyes.
If you have any information about Deborah ca 573-774-6196.
MissingPersonsOfAmerica