Katherine “Baby Kate” Phillips: Sean wanted to give Baby Kate up for adoption 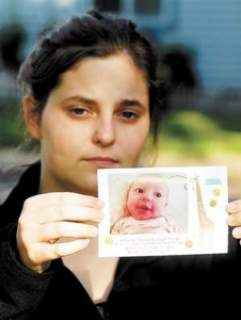 In their nine-page ruling released Friday, Oct. 23, 2015 three judges from the Michigan Court of Appeals concluded there was enough evidence of criminal intent to charge Sean Phillips with open murder in the death of Katherine Phillips.

UPDATE: There has been a Facebook page set up by people who refuse to give up looking for baby Kate.  Also, I have written several stories about Baby Kate.  Put Baby Kate in to the search box to see them all.

Ariel Courtland, 19, the mother of missing Katherine “Baby Kate” Phillips has told The Chronicle that on June 29, the day that Sean Michael Phillips allegedly abducted Kate, Sean was driving them to the Dept. of Human Services office to give Kate up for adoption in Ludington, Michigan.

Ariel said that she refused.

“I wanted him to take a DNA test that day because he didn’t want to tell his parents that Kate is his.  I was sick of it and said, forget it, I’m not going to keep lying to your parents, and we figured if he gets the paternity test, then we could show his parents the piece of paper,” said Ariel, explaining on why they were all traveling together in the car in the first place.

Instead, Sean drove them to DHS in Ludington,  and began talking about adoption instead of going to  Rapid DNA on Highway 10.

She demanded that Sean take her home which he did,  and when she went into the apartment to get the stroller, when she came back, Kate and Sean had driven off.

5 thoughts on “Katherine “Baby Kate” Phillips: Sean wanted to give Baby Kate up for adoption”