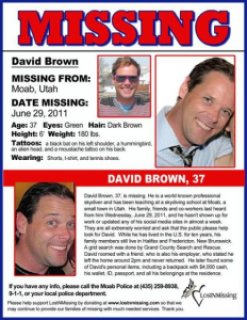 Upate: The body of David Roy Brown has been recovered.

A hiker came across David’s body in Kane Creek Canyon on Sunday.

Although there was a intensive search for David in the days following his disappearance, he was never found.  The location where he was found was rugged terrain and could have been easily missed by the searchers.

Brown was going through a divorce, had financial problems and shut down his own skydiving business.  He move to live in a trailer on the property of the owner of Skydive Moab.

“There’s no bullet, no knife scrape. He went off a ledge for 290 feet,” the police chief said. “Whether he jumped or fell off the edge, I don’t know.”

I believe that he probably fell, and to rule it a suicide, just because of his previous difficulties he was going through is not fair.  Plus, if you don’t know for sure, why hurt Dave’s family with such an assumption.  I doubt that Dave, who was a world record-holding national champion skydiver, would just give up and commit suicide.

Update:  Please look at the comment below for more information, to be considered or ignored.

Dave is a well-known professional skydiver.  He teaches skydiving in Moab, and had been working there for about two months.

Dave is Canadian, and has been living in the U.S. for 10 years.  His wallet, Canadian passport, credit cards, and $4,000 in cash were left behind at his home.

If you have any information on the whereabouts of Dave Brown, please call Moab Police Dept. at 435-259-8938.

A large social network of friends have gathered to spread the word about missing Dave. Click here to see Dave’s Facebook  page.

Dave is 180 pounds, 6 feet tall, green eyes, dark brown hair and has a black bat tattoo on his left shoulder, a hummingbird, an alien head and a mustache tattoo on his back