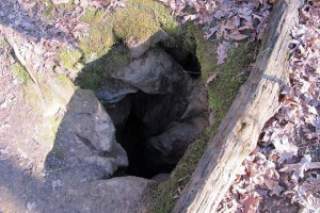 UPDATE:   The police announced today they believe they have found the body of Kevin Eve, the Georgetown caver that has been missing since October 1.

The body was found last Sunday afternoon by cavers who crawled through an underground passage in the Wyandotte area of the Harrison Crawford State forest.

Authorities offered to speculation on the case of death, but they believe that Kevin left a main passageway and went into a nearly hidden, seldom-traveled section of a cave about a half-mile from the main entrance from Scotts Hill Road.

Rand Heazlitt, a caver, along with other cavers, was able to use tools to retrieve the body and move it closer to the cave entrance.  The body was lifted to the surface that evening.

Kevin Eve’s BMW has been found in the Crawford State Forest near Leavenworth, Indiana prompting a search.

Keve was a spelunker and liked searching caves. but his cave exploration equipment was found at his home.  There is speculation that Eve went to that location to look for caves to explore in the future and may have gotten lost.

Searchers have found Walmart bags with receipts and items like candy bars, and cadaver dogs  have alerted on something in the caves.

The authorities have focused on the area near Eve’s car and they will be resuming the search on Thursday.