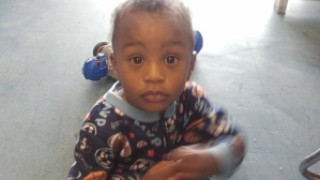 UPDATE:  Sept. 7, 2012 –  Zinah Jennings, 23, was convicted Friday of unlawful conduct for refusing to tell authorities where Amir Jennings is.

Zinah Jennings, 23, showed no emotion as the verdict was read. The jury of eight women and four men deliberated for about 2 1/2 hours before issuing its decision, and a judge sentenced Jennings to the maximum of 10 years in prison. Jennings has been jailed on no bail since her arrest.

Investigators have found Amir’s blood on baby blankets retrieved from Jennings’ car but no other trace of him.

Previous story:  Amir Jennings, 18-months-old, has not been seen since Thanksgiving.

Amir was living with his mother, Zinah Jennings, 22, and around mid December, Amir’s grandmother reported Amir and Zinah missing when she had not heard from them and could not track them down.

Zinah has been suffering with depression since the birth of Amir, according to Amir’s grandmother and Zinah’s mother.

Authorities, on Christmas Eve responding to a one-car wreck and found the driver to be missing Zinah Jennings. When they asked about Amir, she gave conflicting statements as to where he was.

After a week of dead ends, Zinah was arrested on December 29 and charged with lying to the police when all her stories about Amir’s location turned out to be false.

Police are continuing to search for Amir, and his grandmother’s plea for the public’s help has brought needed attention to this case.