UDPATE:  July 16, 2012  – Clifford Miller, 31, had been charged with two counts of first-degree murder in the women’s deaths, according to ABC News station KMBC. He reportedly beat and suffocation the two sisters. Miller of 207 East McElwain, Suite B, Cameron, MO told detectives he was high on methamphetamine’s when he went to Haarup’s home early Friday morning with the intent of having sex with her. Miller said he found Key asleep on a couch, and that after she woke up and confronted him, he beat and smothered her before going to Haarup’s room and killing her, KMBC reported. 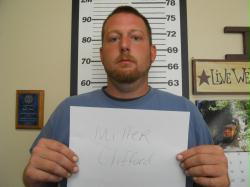 “Suspect went to home to attempt to have sex with Britny, he did not expect to find Ashley there. He was high on meth. After he killed Ashley he realized he had to kill britny. he is the one that put the babies together. he cleaned up , smoked meth in the house, stole the guns, cleaned up and moved the bodies to the truck. He took the bodies to the field. He was seen driving the truck and tried to sell the guns. The girls were beaten and then smothered. He is being charged with 2 counts of 1st degree murder. They are looking for three guns.”

The person of interest was taken into custody Sunday night.

Britny and Ashley are sisters and were reported missing by Britny’s boyfriend, Matt Meyers, when he came home around 4 p.m., and found 6-month-old Adilynn and 18-month-old Aleah in the same crib and Britny could not be found.

Law enforcement found a white pickup truck that they believe the two woman left the house in, on Clinton County Line Road.

“The truck was gone, the girls were gone and Matt has some personal guns that had been missing as well.  That is all he had to tell me, and I knew something was wrong at that point,” Teresa Haarup, the mother of the sisters said.

It has been reported that there was blood on a comforter in the home, and the sisters left their purses, shoes and cell phones behind.

Paul Haarup, Britny’s father told the Kansas City Star that Ashley, a mother of a 4-year-old, had been ‘running with the wrong crowd’ and he is afraid that someone may have abducted them.

The Platte County Sheriff’s Office are talking with a person of interest and have executed two search warrants.
The police have asked for the public to keep an look out for them.

“Just look in the car next to you, look at the restaurants, look at the faces.  They are mothers, they are humans, they are people.  They are everybody’s daughter,” said Capt. Erik Holland with the Platte County Sheriff’s Office.

One thought on “Britny Haarup and Askley Key: Sisters missing from Missouri FOUND”