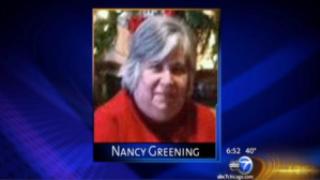 UPDATE:  5/3/13 – Nancy Greening was found about 70 yards downstream from where she was last seen and about a half-mile south of the Illinois and Michigan Canal, according to Illinois Department of Natural Resources and La Salle County Coroner’s Office.

A woman from Peru, Il. that was visiting her daughter and was last seen standing in floodwaters near the Illinois River by her van on Friday is still missing on Monday.

A NewsTribune photograph Genna Ord was flying over the area when she saw a white van near the Shippingsport Bridge near La Salle.   They could see a figure standing in the water next to the van and called the police.

The woman standing in the water was Nancy L,. Greening, 62.  Greening was last seen on Friday and reported missing by her daughter who lives in Illinois.

The police were having trouble locating where the van was because it was not visible by shore, but finally located it Saturday afternoon.  Greening was no longer with the van.

“She had driven around the closed road barricades into flood waters on Route 351 between the Illinois River and the Canal,” said Conservation police Sgt. Robert “Hank” Frazier told the La Salle Tribune.  “The current is very strong in the area where we discovered the van and because of the high waters, it is proving to be a difficult search.”