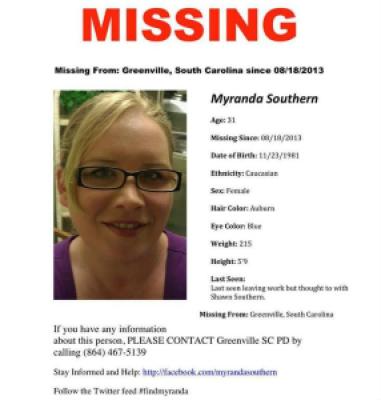 UPDATE: 8/29/13 – A body found in a Laurens County field nearly a week ago has been identified as  Myranda’s.

Laurens County Coroner stated that Myranda died as a result of a gunshot wound to the neck, and  her death has been ruled a homicide.

UPDATE:  On Friday, a body has been found on Bramlett Church Road in Gray Court by a man who was bush hogging in an overgrown pasture.

There has been no confirmation if it is Myranda or not.

Myranda dropped her two children, 8 and 10, at her mother’s to visit for the week and she never returned.  She was last seen at Charter Communications in Simpsonville after she left her night shift.

A neighbor stated that Myranda missed the children and decided to go pick them up early and left early on Monday.  Her friend was suppose to go with her, but she left without her and without returning any phone calls or text messages.

Her friends also said she left a message on her Facebook page that said she needed time to herself, but no one believes that Myranda wrote it.  That message has since been removed.

She was heading to Zellwood, Florida but she never showed up.

Penny Smithers, Myranda’s mother said there is no way that her daughter would not contact her or her children.

Myranda may be driving a beige 4-door Buick LeSabre with SC plate IEP812.