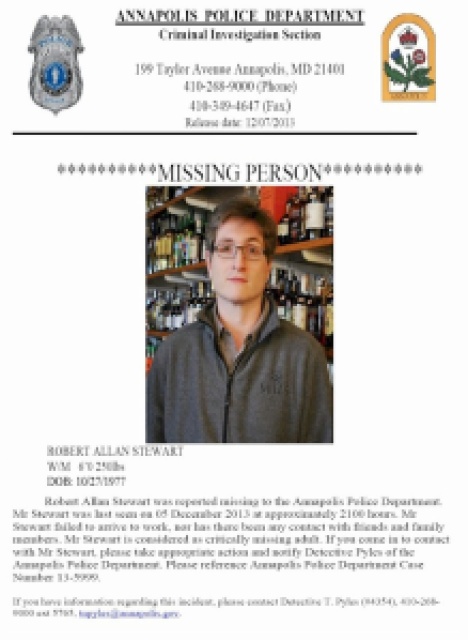 UPDATE:  2/2/14 – Robert’s body was seen in the water near the end of Prince George Street Saturday night.  Robert was very well liked by all that knew him and there was no one that had a bad thing to say about him.  He will be greatly missed.

Previous story:  Robert Allan Stewart, 36, from Annapolis, Maryland has been missing since Dec. 6, 2013.  Robert is the manager at Mills Fine Wine and Spirits on Main Street ad he was reported missing when he didn’t show up for work at 9 a.m. on Friday.

There was a report of seeing him around 1 a.m on Friday morning in the area of Ego alley.

“Robert was last seen on Monday morning around 1 am talking with friends at the docks in front of the Sailing Hall of Fame on Ego Alley. There was activity noted on his phone after this point. That is why it is vitally important to figure out anyone he might have been in touch with that night or any plans he might have made for the evening,” it was posted on Help Us Find Robert Stewart Facebook page.

On Wednesday a dive team searched the water using sonar but nothing was found.

Robert is an alumni of St. John’s and many of his college friends have spent hours putting up posters, searching and sharing social media.

Stewart is 6′ and 250 pounds and has brown hair and green eyes.  He was wearing a gray fleece coat.

One thought on “Robert Stewart: Missing from Annapolis Found”