Is there a connection between Michael Richardson and Charles Merritt

Late last night I was writing up a story about Jovita Collazo who went missing in 1992.  Police already knew she was dead and even who killed her, as the man confessed, but they didn’t know where her body was.  What got my attention was the fact that Collazo’s body had been found two and a half miles off Interstate 15 and Stoddard Wells Road in a shallow grave, the San Diego Union reported.

Collazo was buried there by Michael Eugene Richardson whom admitted to killing her after he took a plea deal for murdering Collazo and his wife and mother-in-law.  He never divulged where he buried Collaza.  You can’t help but wonder why.  If someone already admits to murdering someone and is even serving a life sentence, why not tell the family where her body was?

Richardson was fresh out of the Army in 1975 when he flagged down a cab driver in North Carolina and shot him three times.  The cabdriver did survive, and Richardson was convicted.  He escaped from jail in 1982 while he was on a work crew and just disappeared.

Richardson ended up in San Diego County.  On August 4, 1982, while still a fugitive, Richardson married a woman named Olivia in San Diego and then divorced her two and a half years later.  He meets Jovita next and they lived together at an apartment on B Avenue in National City.  Collazo worked  as a bartender in Imperial Beach, along with Jovita’s daughter.  Then in April 30, 1992, Jovita goes missing.  After Collaza “left” which was what Richardson told the police, he moved to Washington state taking Collaza’s daughter with him.  In the mid 90’s Richardson married Thao Nguyen.

In 2000, Richardson was caught and brought back to North Carolina to serve his remaining 22 year sentence, but ended up serving only seven months before he was paroled.  He moved back to California in 2001, and opened up Mike’s Auto in Poway in 2010.

On June 29, 2010, Richardson is arrested, but not just for escaping jail but for killing his wife and mother-in-law and driving their car over a cliff in Lakeside to cover it up.  His wife had been strangled and his mother-in-law’s throat was cut.  Evidently his wife found out he had been molesting his niece, and threatened to tell the police.

After Richardson was arrested the Deputy District Attorney Chantal DeMauregne said Richardson has transferred in excess of $500,000 into various bank accounts in recent days.  His total assets added up to $10 million dollars. DeMauregne did not elaborate on how Richardson accumulated the assets.   The business showed annual revenue of $110,000 to  $160,000.

“There are a lot of other factors that I can’t go into as to where that money was coming from,” DeMauregne told News 8 outside court.

Three years later in Aug. 2013, Richardson took a plea deal and stated he murdered his wife and mother-in-law and Jovita, even though her remains had not been found and got life in prison without parole.

Back to Oct 31, 1994, a rock hunter from Victorville found a skeleton in a shallow grave in Apple Valley near Stoddard Wells Road.  There was no DNA back them and the remains were buried in a county cemetery as a Jane Doe.  In 2006, John and Jane Doe’s were being exhumed to take DNA samples. The authorities were working feverishly to finally put a name to all these unnamed people and bring some answers to their family’s.  Finally in 2008 they got to Collazo’s remains but there was no match for her in the database as her family had not provided any.

So, Sgt. David Bavencoff who began working on Collazo’s case in 2010, realized the Collazo family had never given their DNA samples and asked them to.  Finally in 2015 the DNA samples proved the remains found on Stoddard Wells Rd. did belong to Collazo.  Finally Jovita had been found.

If Richardson admitted to killing her and is serving time in prison because of it, then why would he not say where she was buried?

Although I have done a lot of research I have not found the exact location of where Collazo’s remains were found.  I did find that from one end of Stoddard Wells Rd. to the other is 30 miles.  There is homesteads dotted along the route from one end to the other, but most of the area is very remote with unpaved roads forking off everywhere.

Charles Merritt who is currently in custody awaiting trial for the murder of the Joe and Summer McStay and their two children.  Merritt has been accused of killing and burying four members of the McStay family in two shallow graves on Stoddard Wells Rd. 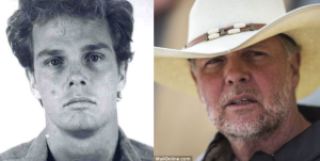