Police searching for two children taken by their father FOUND

UPDATE 10/23/16 – The children have been found and returned back to their mother.

Original story:  Authorities are searching for two missing children from North Carolina that may be in Florida.  They are believed to be in the company of their father, Victor Brian Hutcherson in a light gray Dodge Ram 1500 truck with Florida plates H7769Q.  Victor was last seen here in Jacksonville, NC for the past three weeks. But may be heading to Madison Florida back to his home, said the children’s mother, Corrine.

Corrine, their mother has stated a Judge has signed  an order requiring the two children Blake, 9, and Abigail, 7,  to be returned to their mother immediately and that his visitation rights are suspended.  Corrine stated that Victor was arrested just two weeks ago for trespassing on her property.  Corrine also stated that Victor has dyed Blake’s hair black.  Corrine also posted on her Facebook page that an Amber Alert will be activated if the children are not returned to her by midnight. 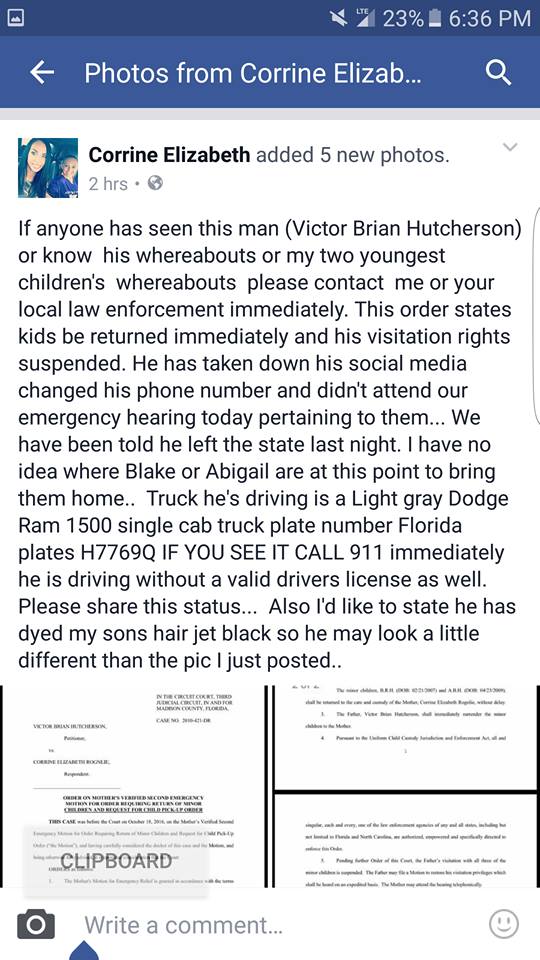 If you see the vehicle and/or the children or Victor please call 911.